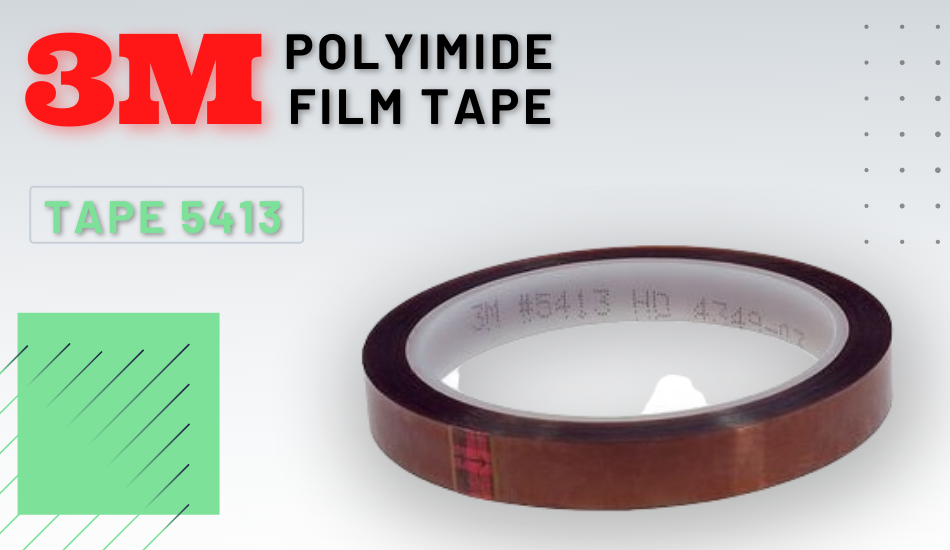 If you are working in the electrical field or with electrical devices, you must be aware and would have used polyimide film tape. People refer to it by various generic names such as Kapton tape.

It has various benefits like voltage insulation, it is economical and versatile that comes in various sizes and thicknesses. You are looking for something similar then stay tuned to know if 3M 5413 polyimide film tape can be suitable for your application and where to find the right product.

What is Polyimide Film Tape and How is it Made?

The polyimide film tape is made by combining a polyimide film and adhesive backing. It has the additional feature of being sturdy in high temperatures.

The polyimide film tape can maintain its physical, mechanical, and electrical properties. It can withstand a wide range of temperatures and its versatility enables it to be used in almost any product to the highest point of temperature.

Like other conductive tapes from 3M, the 3M 5413 polyimide film tape is also dielectric and can be removed from the surface without leaving any residue of adhesive.

The polyimide tape is made out of polymer-based imide monomers. The base material, “imide”, is a combination of nitrogen in the group of two acyls.

The polymer chain is made when one monomer molecule reacts with another molecule, this process is called polymerization and creates a chain of events that make the polyimide tape.

Also, the polyimide film can resist very high heat along with only a few other materials. These are also chemical resistant along with being heat resistant and flexible with high tensile strength.

It is heat resistant but can be burnt; this is very interesting as it is self-extinguishing. It means even if it catches fire, it will self-extinguish itself quickly only the upper or the surface of the tape gets charred and burnt without impacting the other parts.

This makes it very safe to work within high heat operation temperatures where fire accidents are common.

The polyimide film tapes are not ordinary tapes but extraordinary. let’s check out some of its features.

These can simply work for a long-term period between -4500C to 5000C. Its ability to work for an elongated period decreases the need for reworking which turns into high productivity.

This tape remains very well stable at high temperatures and it is flame retardant as well. It is chemical and radiation-resistant as well.

Also, a polyimide film is a highly convertible material that makes it easier for designers and manufacturers to customize it according to the need.

It comes with a silicone-based pressure-sensitive adhesive that easily bonds with many materials and surfaces.

The Specs of Polyimide Tape

It is one of the thinnest insulators that are available in the market with a thickness of around 0.1mm. Its dielectric strength is 6.5 kV and the overall strength of tape is 200kPa.

Another great point is that it has a great shelf life along with a longer life cycle. These are very strong considering the very thin sheets it comes in.

It is available in single and double-sided adhesion which creates room for more possibilities.

Let’s take 3M Polyimide Film Tape 5413 with DuPont Kapton polyimide film and silicone adhesive. The color is amber with a 2.7 mil (69 microns) thickness. Some other applications are such:

The 3M 5413 polyimide film tape is transparent and most commonly used in printed circuit boards. Its transparency allows the observation of the PCBs during the processing.

These are also resistant to high temperatures with a strong adhesive system that leaves no residue after removal of the long-term application.